At present, most pear farmers use artificial pollination, one is ” shaking stocking ” pollination, pear farmers mix a little flour in the pollen, wrap it with stockings, and then shake off the pollen a little bit from the branches. In the case of pear trees that are 4 or 5 meters high, they have to connect poles to shake pollen on the ladder, which not only takes time and effort, but also pays expensive labor costs when they have a short flowering period; some pear farmers use sprayers for liquids. Pollination, but manual spraying is not uniform, and the fruit setting rate of fragrant pear is very low.

The members of the flying defense team said that the key to achieving a high pollination rate by drones is the uniform and precise spraying technology. However, pollen is insoluble in water, and it needs to be mixed together with a special solution to make a suspension before it can be used for spraying. The traditional pressure spraying device is easy to squeeze the pollen grains together, and it is difficult to evenly attach to the flower stigma.

After investigation, they adopted a pollinating nutrient solution boiled with a patented formula, boiled with xanthan gum, containing elements such as calcium and boron sugar, which can effectively extend the flowering period and increase the pollination probability of fragrant pears. The nutrient mother liquor is provided by the flying defense team, but due to the different price and quality of local pollen, the pollen is purchased by the farmers themselves, and it is more convenient for the farmers to buy it themselves. As locals, they know more clearly where to buy cheaper pollen.

The blooming period of the fragrant pear tree is generally about 10 days, during which the drone needs to pollinate the fragrant pear tree 2-3 times. When the drone is pollinating, the humidity and temperature requirements are relatively high, and the pollination needs to be carried out at an air temperature of about 20 ° . Therefore, the flying defense team operates in the morning and evening to avoid the high temperature at noon and the low temperature at night. , Also need to work in windless weather.

The accurate RTK positioning function of plant protection drones can help them a lot during the operation. It is difficult to find a suitable take-off and landing position in the area where they operate. The RTK fixed-height function is used to achieve fully autonomous flight. If there is no RTK , the difficulty will be greatly increased, and the chance of bombing will also increase.

However, during the operation, there was still a bomber accident. At that time, the pilot was a novice and lacked practical combat experience. The plane was hung on the Xiangli tree after a forced landing. Fortunately, they had made corresponding preparations before. , Start the standby machine urgently for operation, otherwise pollen will be affected if pollen is not finished within 30 minutes. 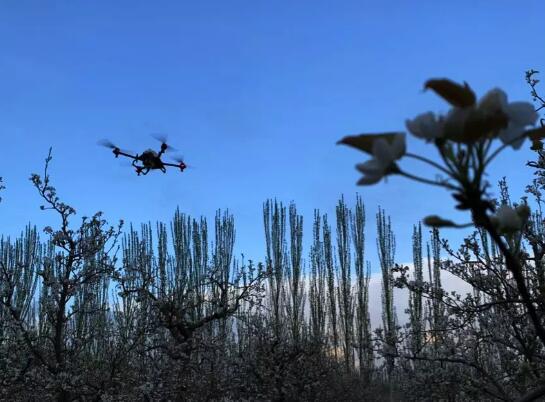 Drone pollination has a hundred times the operating efficiency of humans, while ensuring a high pollination rate, greatly improving the yield and quality of fragrant pears. The team members said that until most pear farmers have accepted the new model of drone operation, in addition to pollination by drones, they can also use drones to spray drugs to prevent and control pear tree diseases and insect pests. He believes that in the future, drones will enter thousands of households, and there is a lot of promise. He will stick to it, serve the future drones practitioners, share their experience with them, and let them avoid detours as much as possible.