Chat with us, powered by LiveChat
Home News One for two: Russian armed unmanned vehicle with two quadrotor drones

Foxtech quoted foreign media as saying that the Russian Advanced Research Foundation (FPI) launched an upgraded version of the Marker unmanned ground vehicle (UGV), which has a longer range and a larger body, and may be intended to be equipped with a larger caliber Weapon. 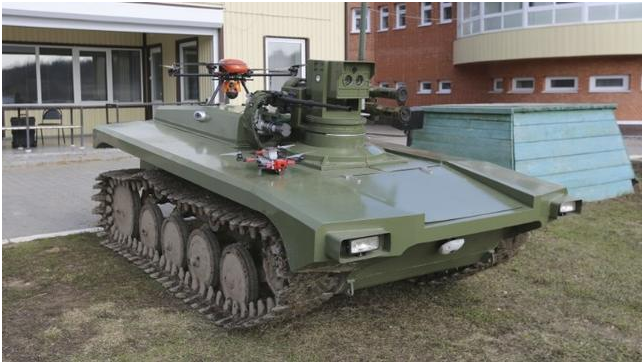 The Marker UGV has five steering wheels, a steering wheel, a drive sprocket and two roller returns. The rear of the flat UGV has a larger payload bracket area with the engine and cooling unit in the front. The upgraded UAV is also equipped with the ability to launch two small reconnaissance unmanned aerial vehicles (UAVs) to perform missions individually or in groups through a cluster launch module. It is reported that the system completed testing on October 17 last year.

The latest news says that five UGVs are under development. Two of them have completed testing of the tracking platform and are still developing wheeled versions.

Two experimental prototypes of the Marker UGV were tested in July 2019. The first phase of the project (including trials in coastal areas) was successfully completed on tracked chassis on July 25, 2019 and tested at the Magnitogorsk robot system and robot system test site.

Since July last year, the FPI has allowed UGV to test in urban areas and rugged terrain as a first stage demonstration. The second phase involves maneuvering and aiming and firing tests. Further weapon testing is expected to take place in the first quarter of 2020, and UGV’s goal is to be carried out in “automatic mode”.