Once in 2017 Nian 12 Yue 24- Valencia, Spain, Japan, and Spain Quaternium hybrid four-rotor UAV created a blank for up to 4 Xiaoshi 40 -minute documentary.

Using drones in agriculture can improve the accuracy and efficiency of farmers’ work and make accurate land management decisions easier. Drones can be used for a variety of tasks, including monitoring the health of livestock and crops, estimating soil conditions, growing future crops, and fighting infections and pests. 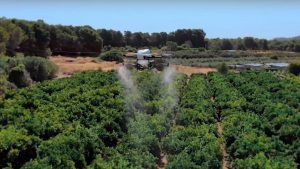 The Spanish HYBRiX drone is powered by a hybrid fuel system with a fuel capacity of 5 liters and a battery life of 2-4 hours. This powerful propulsion system allows drones to carry up to 10 liters of liquid (including fertilizers) with a maximum takeoff weight of 25KG . As a result, drones can operate for longer periods of time and cover more farmland without requiring farmers to bring heavy batteries to the field.

The farmer Pedro · Andrew ( Pedro Andreu ) in their farms tested HYBRiX drones, and unmanned aerial vehicles to be used to the advantage of precision agriculture convinced hope to encourage other farmers to adopt the technology. He says:

” I’m glad to see that the entire spraying process for my orange field takes almost 6 hours. For other drones, we have to spend multiple hours waiting for the battery to charge and it takes days to get the job done. “