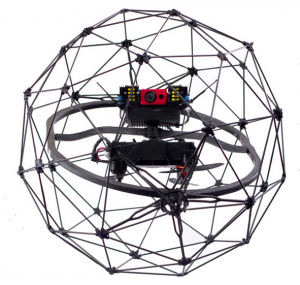 Recently, Swiss cage drone makers Flyability and Pix4D announced that they have recently signed a cooperation agreement to provide bundled Flyability and Pix4D products. The bundle will be sold as a photogrammetry accessory and can be purchased on the Elios 2 drone package. This offer is designed to provide people who want to use photogrammetry to solve 3D modeling indoors with the opportunity to access a consistent and complete product.

To illustrate the value of 3D modeling in confined spaces , Flyability is currently demonstrating a customer for a refinery. Customers want to know if they have to provide a reliable solution for the care of their equipment during the turnaround. However, by viewing 2D pictures before , they have serious flaws, so this is extremely challenging. By building a 3D model of the part of interest , they can immediately see that the defect does not threaten the functionality of the device and take remedial measures.

” Using 3D models can save them a few days of downtime. Drones and photogrammetry have proven their potential in many applications, but creating 3D models with Elios 2 now enables teams to make more informed decisions, And provide a valuable record for the future in places that were once inaccessible to the naked eye. “